The VIRGO collaboration was set up between Italian and French research teams, for the realization of an interferometric gravitational wave detector. 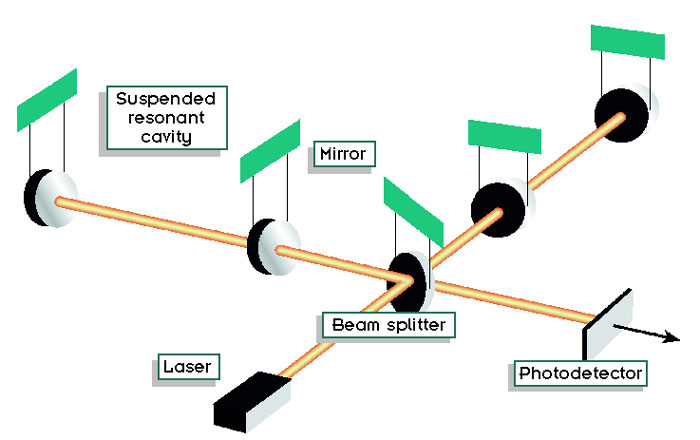 The Virgo detector for gravitational waves consists mainly in a Michelson laser interferometer made of two orthogonal arms being each 3 kilometers long. Multiple reflections between mirrors located at the extremities of each arm extend the effective optical length of each arm up to 120 kilometers. Virgo is located within the site of EGO, European Gravitational Observatory, based at Cascina, near Pisa on the river Arno plain.

The frequency range of Virgo extends from 10 to 6,000 Hz. This range as well as the very high sensitivity should allow detection of gravitational radiation produced by supernovae and coalescence of binary systems in the milky way and in outer galaxies, for instance from the Virgo cluster.

In order to reach the extreme sensitivity required, the whole interferometer attains optical perfection and is extremely well isolated from the rest of the world in order to be only sensitive to the gravitational waves. To achieve it, Italian and French scientists involved in the project, have developed most advanced techniques in the field of high power ultrastable lasers, high reflectivity mirrors, seismic isolation and position and alignment control.

In the field of optics, Virgo uses a new generation of ultrastable lasers, and the most stable oscillator ever built. A specific optical coating facility has been built to produce extremely high quality mirrors combining the highest reflectivity (over 99,999 %), with nanometer surface control

To avoid spurious motions of the optical components due to seismic noise; each one of them is isolated by a 10m high, very elaborate system of compound pendulums. Because the presence of a residual gas would slightly perturb the measurements the light beam must propagate under ultra high vacuum. The two tubes, 3km long and 1.2m diameter each are actually the largest ultra high vacuum vessels in Europe and the second largest in the world. The environment of the Virgo interferometer is quieter than that of a spacecraft orbiting the earth.

Virgo, the construction of which was completed in June 2003 and is at present is in the commissioning phase, will run day and night listening to all gravitational signals which may arrive at any time and coming from any part of the Universe. The signals are detected, recorded and pre-analysed through an on-line computing system. These data will then be made available to the scientific community for further analysis

We use cookies to ensure that we give you the best experience on our website. If you continue to use this site we will assume that you are happy with it.Ok