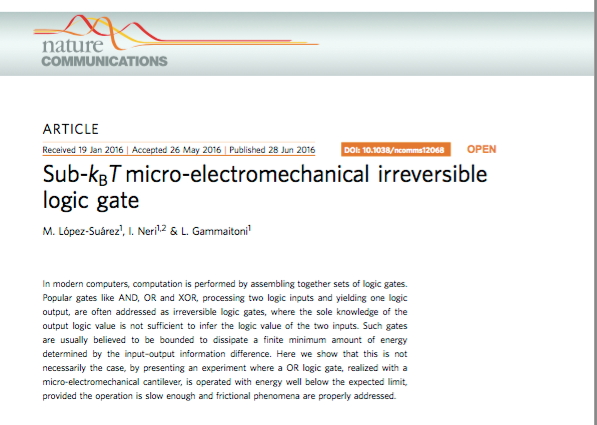 Published today on Nature Communications the results of an experiment at NiPS Lab, in Perugia, Italy. They show that irreversible logic gates can be operated below the Landauer’s limit.

A quote often attributed to Einstein reads: Everyone knowsthat something is impossible to achieve until you get a naive she does not know and invents.

In 1961 Ralph Landauer at IBM, published a work where for the first time “information”, usually considered a purely mathematical quantity, assumed a role in physics (IBM JOURNAL OF RESEARCH AND DEVELOPMENT, VOL. 5, NO. 3, 1961). Specifically, the work of Landauer was aimed at identifying the minimum energy required to do computation, using standard thermodynamics. Landauer initially focused on a specific operation, today know as “Landauer reset”, that consists in putting into a given logic state (e.g. “0” state) a binary switch that can be in each of the two possible logic states “0” or “1”. Such an operation is sometime interpreted as “information erasure” because it reduces the amount of information that can be associated with the binary switch: before we have two possible states and after the operation only one possible state. According to the thermodynamic such a reduction in the number of available states for a physical device requires a minimum energy expenditure, easily computable using previous work done by Boltzmann, as kBT ln 2 (where T is the temperature and the kB Boltzmann constant).

In the same paper Landauer generalized this result associated with the reset operation to the cases where there was a decrease of information between the input and the output of a computing system. This is the case of the so-called logically irreversible devices. Landauer wrote:

In fact most of the standard logic operations in ordinary computers show “logical irreversibility”. This is the case, for example, of the popular “OR” gate where we have two bits at the input and one bit at the output. In this way the sole knowledge of the value of the output is not enough to infer the actual values of the inputs (from this the idea of “irreversibility”).

Soon after Landauer’s paper other scientists worked to deepen and extend Landauer’s principle to more general aspects of information processing. The most important result in this effort is attributed to Charles Henry Bennett,at IBM he himself. In 1973 he published a work entitled “Logical reversibility of computation” (IBM Journal of Research and Development, vol. 17, no. 6, pp. 525-532, 1973) where he proposed to introduce a model of computing, i.e. new devices, where there was no information decrease between the input and output of any logic operation.

The motivation that led Bennet to introduce logical reversible operations was to overcome the minimum energy expenditure introduced earlier by Landauer. Bennet wrote:

Landauer has posed the question of whether logical irreversibility is an unavoidable feature of useful computers, arguing that it is, and has demonstrated the physical and philosophical importance of this question by showing that whenever a physical computer throws away information about its previous state it must generate a corresponding amount of entropy. Therefore, a computer must dissipate at least kBT ln2 of energy (about 3 X 10-21 Joule at room temperature) for each bit of information it erases or otherwise throws away.

Most notably this limit was generally attributed to all the logical irreversible devices and among them the traditional logic gates, like “OR”, “AND” and “NAND”. Landauer and Bennet works did not go unnoticed and a significant amount of scientific literature was produced to oppose or to support the existence of such minimum limit. It is not exaggerated to state that for more than 40 years the topic has been considered highly controversial.

Today, finally, an experiment put an end to this controversy. It clearly shows that there is not such a minimum energy limit and that a logically irreversible gate can be operated with arbitrarily small energy expenditure. Simply put: it is not true that logical irreversibility implies physical irreversibility as Landauer wrote.

The results of this experiment made by the scientists of NiPS Laboratory at the University of Perugia, are published today on Nature Communications. They measure the amount of energy dissipated during the operation of an “OR” gate (that is clearly a logically irreversible gate) and show that the logic operation can be performed with an energy toll as small as 5% of the expected limit of kBT ln2. The conclusion of the Nature Communication article is that there is no fundamental limit and reversible logic is not required to operate computers with zero energy expenditure.

Why did we have to wait such a long time in order to discover this? The reason is that the experiment had to reach an exceptional sensitivity in order to show that the Landauer limit could be beaten: better than 10-21 Joule, where 1 Joule is the energy that it takes to rise an apple for one meter above ground. This is a very small amount of energy in any regards.

What are the implications of this discovery? The “OR” logic gate used by the scientists at NiPS Laboratory, is realized with a micro-electromechanical cantilever, acted on by electrostatic forces. Although it cannot be considered a promising new technology for substituting the energetically expensive transistors that make our computers today, the importance of the experiment is in the demonstration that there is no limit to how much we can lower energy consumption during computation. This will change our understanding of the energy dissipation processes and push forward the research.

We expect this result will impact future developments at least in the following aspects:

–        It will push the research towards “zero-power” computing: the search for new information processing devices that consume less and less energy. This is of strategic importance for the future of the entire ICT sector that has to deal with the problem of excess heat production during computation.

–        It will call for a deep revision of the “reversible computing” field. In fact one of the main motivations for its own existence (the presence of a lower energy bound) disappears.

By quoting the famous Landauer expression “Information is physical” (R. Landauer, Physics Today, 1991) we can conclude that, after this result, information is not so physical, after all.

This work has been developed under the FET-Proactive EC-funded project “LANDAUER” (G.A. 318287).