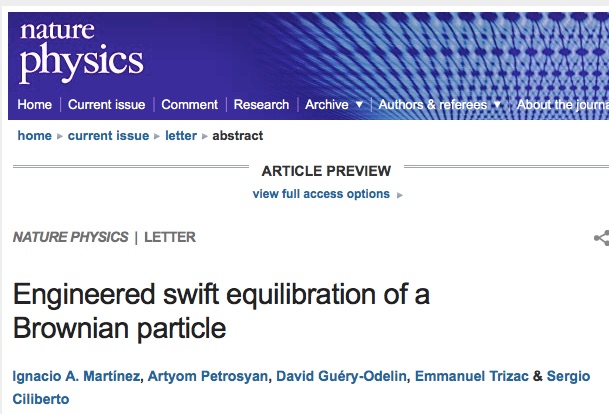 Abstract
When  a control parameter of a system  is suddenly changed, the accessible phase space changes too and  the system needs its characteristic relaxation time to reach the final equilibrium distribution.  An important and relevant question is whether it is possible to travel from an equilibrium state to another in an arbitrary  time, much shorter  than the natural relaxation time.
Such strategies are reminiscent of those worked out in the recent field of Shortcut to Adiabaticity, that aims at developing protocols, both in quantum and in classical regimes, allowing the system to move as fast as possible from one equilibrium position to a new one, provided that there exist an adiabatic transformation relating the two. Proof of principle experiments have been carried out for isolated systems.
Instead  in  open system the reduction of the relaxation time, which is frequently desired and necessary, is often obtained by complex feedback processes. In this talk, we present  a protocol,named Engineered Swift Equilibration (ESE), that shortcuts time-consuming relaxations. We tested experimentally this protocol  on  a Brownian particle trapped in an optical potential first and then on an AFM cantilever. We show that applying a specific driving, one can reach equilibrium in an arbitrary short time.  We also estimate  the energetic cost to get such a time reduction.

Beyond its fundamental interest, the ESE method paves the way for applications in micro and nano devices, in high speed AFM, or in monitoring mesoscopic chemical or biological process.

Share on FacebookShare on TwitterShare on LinkedinShare on Reddit
Seminar: Sergio Ciliberto, A protocol for reaching equilibrium arbitrary fast