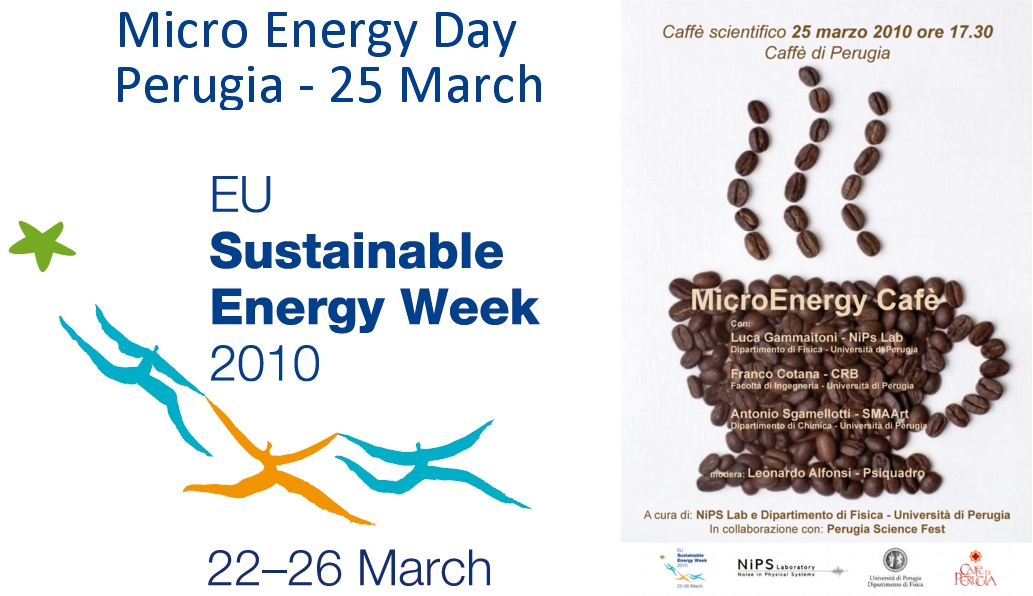 NiPS with the Department of Physics of the University of Perugia, promote the first Micro-Energy day.

An entire day of events addressed to the experts and the general public aimed at exploring the energy processes at micro and nano scale.Discovering the physics of the so called middle world leads to some unexpected and surprising processes that can become a source of energy for nano-machines and zero-power devices.

The Brownian motions of molecules are an example of these processes together with all the imperceptible and chaotic vibrations of the bodies all around us. All this movement can become a source of energy for micro sensors or nano robot, devices that in the future could be used to monitor the environment parameters or to diagnose human health conditions.

How to use the middle world energy? What economical and social impact should we expect from these new kinds of sustainable energy?

These questions will be addressed through science communication events organised during the day.

A lunch seminar within the programme “A pranzo con la fisica”talks,  will be organised at the Department of Physics in Perugia to talk about the efficiency in thermoelectric processes.

A science cafè will be held in the afternoon (17.30) at the Caffè di Perugia, in the city centre (Corso Vannucci) to engage general public with the energy in nano-sciences. A science communicator (Leonardo Alfonsi) will dialogue with the public and three scientists: a physicist (Luca Gammaitoni) a chemist (Antonio Sgamellotti) and an engineer (Franco Cotana).

During the day science communication gadgets will be distributed in different points of the city to reach and disseminate   the idea of zero-power devices among a wide audience.